on August 31, 2013
I’ve had about a 25 minute drive each way commuting to work for close to the past three years. While I’ve listened to the occasional podcast to try to make something out of this 4 hours a week that I must expend for my job, I often would resort back to music. Nothing wrong with that. Sometimes it helps me wind down from the day. In the past couple weeks though, this picture has been making it’s way around the web: 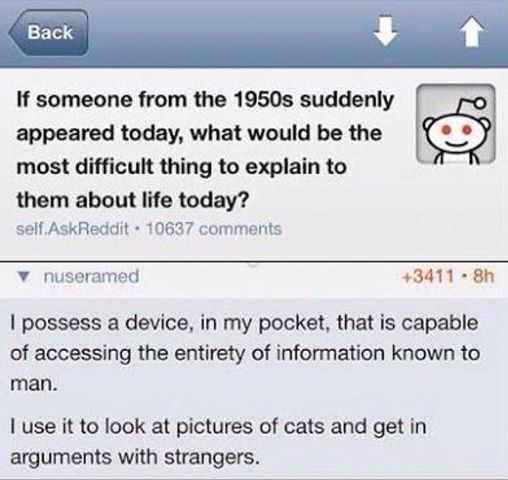 I was rather inspired by this. Here I have access to a wealth of knowledge through my phone, but rarely use it as such. There’s plenty of things I’ve wanted to learn about but usually ended with thinking “I don’t have time” when I got home.
So, recently I’ve been exploiting my phone for learning opportunities. Not home and have to wait on something? Just bust out one of those cheap e-books Amazon was giving away in the past.  I’ve also come across a few more ways to utilize audio in my car beyond the simple podcast or audiobook.
Wikipedia Spoken Articles

I’ve recently became aware of the Spoken Wikipedia Project. People donate their time to speak entire articles for people to download and listen to for free. Some wikipedia articles are detailed and lengthy on the subject matter. This works great for me since I’m a slow reader. I’ve started out listening to the hour and a half long recording of the Cold War article. Somewhere around 18,000 words, it probably would have taken me much longer to read on my own and I wouldn’t have been able to use commute time for it. Check out the full spoken article list here.
Spoken Blog Posts

So many awesome blog posts to read but don’t have the time? There’s a couple ways to listen to them instead. The simple way is using text to speech software. Apple has come a long way on text to speech in making it sound more natural. I don’t personally have an iOS device however and many of the other options sound so mechanical that it’s distracting. Meet option two, pay for a post to be read. There was a blog post I wanted to read last year but at over 6,000 words I knew I would just never get around to it. Now, there are professional oration services, but they can be pretty expensive just for a single person to pay for. I ended up posting a job for oration on Amazon Mechanical Turk for much cheaper and with pretty decent results. You can read more details here.
Side thought: I think spoken blogs could be a great way to suck in more information. Problem is, even at the relatively cheap price I got one spoken for (about $14), it’s still a bit pricey for doing on a regular basis. What would be awesome would be a website where people could post their own recordings of large blog posts (paid or done by themselves) to share with others. See a huge post you want to read but don’t have the time? Just check and see if anyone has posted a recording.
YouTube/Other Video

You probably already have some idea that there is more to YouTube than cats chasing lasers. Need to brush up on your math skills? There’s tutorials. Want to play the piano, there’s tutorials. How about learn a foreign language? Guess what, tutorials. Granted you won’t be able to fully interact while driving but you may be able to get the bulk through listening. That and lectures, speeches, talk shows, chances are there’s something related to your field of interest. A couple good examples for the tech community:
Eric Ries - Lean Startup Speech (loved listening to this)
John Carmack’s Keynote at Quakecon 2013

Often when you read an article or listen to some TV program mentioning some amount of money significantly in the past, they will often give a separate amount in “today’s dollars”. That is, since the value of the dollar decreases (usually) over time (inflation), how many dollars would we need today to have the same value? Such “adjusted for inflation” amounts are often provided in order to give a better perspective to a modern listener or viewer just how much value a given amount of money had back then to society. What we don’t see often though (I have never seen this actually), is an “adjusted for inflation” value when talking about data sizes of the past. Referencing the double density floppy disk as holding 1.44MB has sounded abysmally small for the past decade. However, when they were released back in the 80’s, this was not the case. I remember a tech teacher of mine saying that when he first got his 3.5 inch floppy drive and disk, the question that came to his mind was “how on Eart

Cross post from my employer's development blog:  http://rootinc.github.io/2016/03/16/pass-requirements-sails/ If you perform an installation of [Passport][passport] with [SailsJS][sails] using the [Sails Passport Auth Generator][sails-generate-auth] you get several files in your app already configured for you. If you then use passport-local, you will already have a complexity requirement on the password. It defaults to requiring 8 characters minimum, letters, numbers, and symbols. What if you want to change this requirement? In the generated model file `Passport.js`, you should see a line that says `provider   : { type: 'alphanumericdashed' },` and `password    : { type: 'string', minLength: 6 }`. The minLength is an easy and obvious change. What about the complexity requirement though? This stumped me for a bit. There doesn’t seem to be any mention of these keywords or providers on the Passport official site, nor anything in the [Passport-local repository][pass

No, Don't Move to Canada

The 2016 presidential election year is upon us Americans. As the parties narrow on a candidate, it feels as though the atmosphere manages to get even more polarized. Eventually we start hearing the stories from friends and family, to even celebrities, stating “If [candidate I hate] get’s elected, I’m moving to Canada!”. We then all laugh once candidate X is elected (especially if we were a fan) as said person(s) don’t move to Canada. Even though we know most people are not literally serious when they state this, I feel it highlights a bigger issue that we don’t talk about enough. Simply put, we place way too much importance on who holds the U.S. Presidential office. When we say “I’m moving to Canada”, we’re essentially saying that the fight is over, there is no hope, even though we don’t actually pack up our bags and move. Which indirectly is stating, that there’s nothing we can do as an individual or community. That out of all the issues America faces, no non-profit, grassroots or